To:         Faculty, Staff and Students, Dictionary of Canadian Biography

Re:        Appointment of General Editor

I am pleased to announce the appointment of Professor David A. Wilson as the General Editor of the Dictionary of Canadian Biography, dating from September 1, 2013 to August 31, 2015.

In his welcome to David Wilson, David Cameron, Interim Dean of the Faculty of Arts and Science, noted that the DCB “has been blessed with superlative leadership and a terrific staff.” Expressing his gratitude for “their enormous contributions” to one of the university’s “most prestigious humanities projects,” he stated that the DCB is “fortunate” to have David Wilson as its new general editor, the sixth in its 54-year history. Cameron has described the DCB as “a national treasure,” and praised the “exceptional fruitful partnership” between the University of Toronto and the Université Laval, where the French team of the project, the Dictionnaire biographique du Canada, is based.

“One of the best things about the Dictionary,” Cameron said, “is that it reaches beyond the academy to the broader Canadian public, providing easy-to-read accounts of the lives of people who contributed significantly to our country’s development.” He pointed to the Governor General’s History Award for Popular Media: The Pierre Berton Award, presented to the DCB/DBC in 2012, as eloquent testimony to this belief. In welcoming David Wilson to the DCB, the Dean expressed his confidence that he would “maintain the Dictionary’s reputation for high editorial standards as well as its commitment to original research and fine scholarship.” He added, “And I know he has some promising ideas for new forms of outreach and engagement.”

Professor David A. Wilson specializes in Irish Canadian history. In 2008 he published Thomas D’Arcy McGee, Volume 1: Passion, Reason and Politics, 1825-1857, the winner of the Raymond Klibansky Prize for books in the humanities that received support from the Aid to Scholarly Publications Program (now the Awards to Scholarly Publications Program), and co-winner of the James S. Donnelly, Sr. Prize for books on Irish history and social sciences. It was followed in 2011 by Thomas D’Arcy McGee, Volume 2: The Extreme Moderate, 1857-68, which won the Canadian Historical Association’s prize for political history. In 2000 Professor Wilson won the Faculty of Arts and Science Outstanding Teaching Award (Humanities).

His other books include The History of the Future (2000); United Irishmen, United States (1998); Ireland, A Bicycle and A Tin Whistle (1995); and Paine and Cobbett: The Transatlantic Connection (1988). He has edited Peter Porcupine in America: Pamphlets on Republicanism and Revolution (1994), The Orange Order in Canada (2007), and Irish Nationalism in Canada (2009). With Mark Spencer, he co-edited Ulster Presbyterians in the Atlantic World (2006) and, with Graeme Morton, Irish and Scottish Encounters with Indigenous Peoples: Canada, the United States, New Zealand, and Australia (2013). He is currently preparing a book on Fenianism and the origins of the Canadian secret police force.

As an undergraduate, David Wilson developed a passion for historical biography, which he now brings to the DCB along with admiration for its standards of excellence, standards that have made it, he says, “the best project of its kind in the world.” 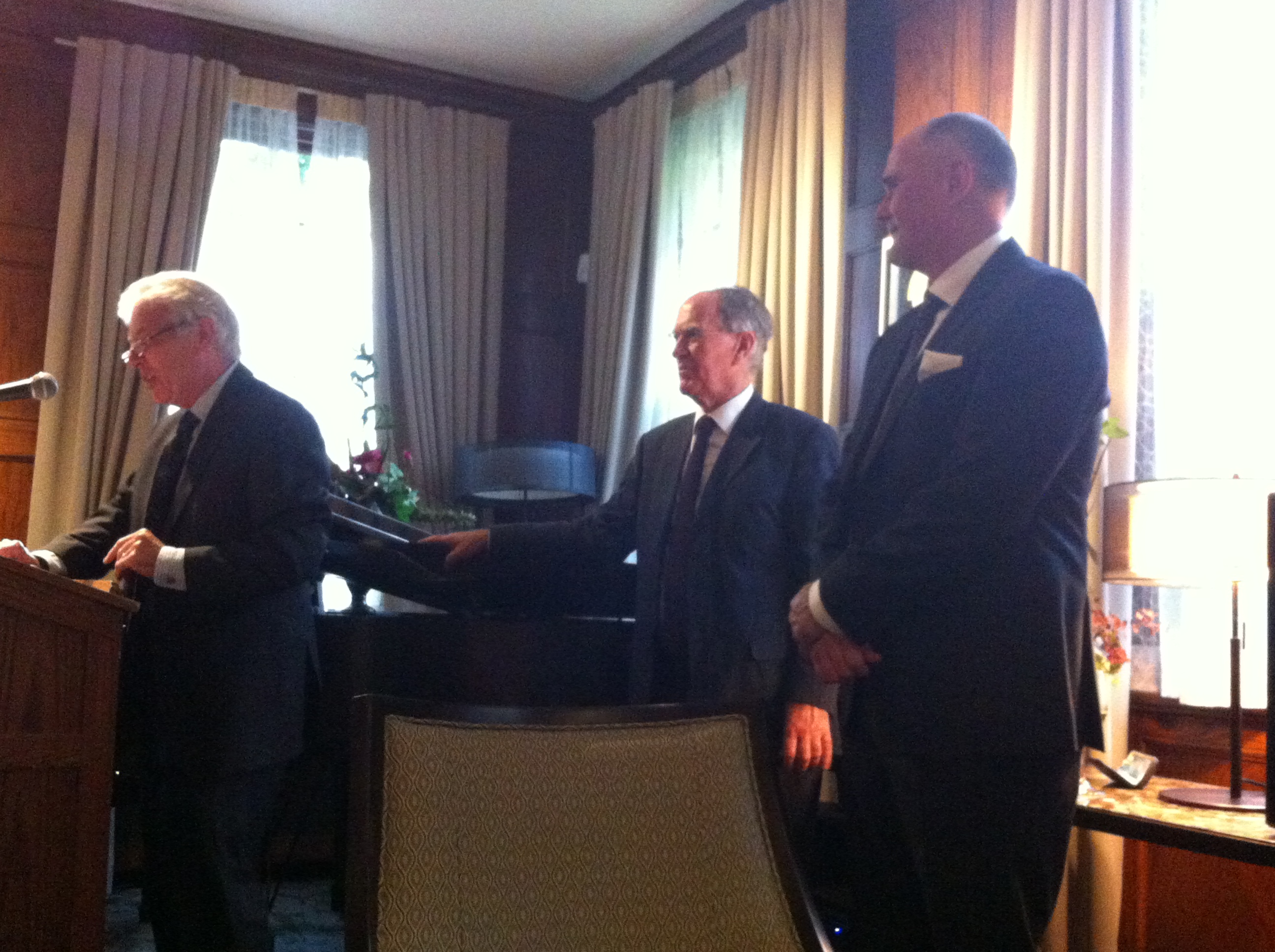 Official welcome at the Faculty Club, University of Toronto, 9 September 2013